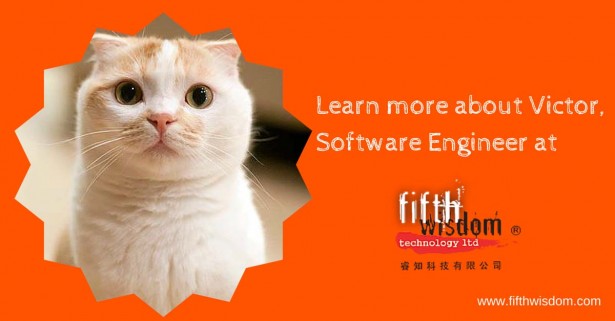 We sat down this week with another brain of FifthWisdom, Victor, who shared with us how he sees the future of Education and how he loves cutting monsters for fun. (Well not in real life!).

Who are you Victor?
Hi my name is Victor and I’m a software engineer at FifthWisdom. I started to work here as an intern for one year right after I graduated from the City University of Hong Kong in Kowloon Tong. My final year project was building 3D mini-games (I remember it was a labyrinth, another one was about Augmented Reality, and one was an adventure jumping game)
I studied Information Engineering at the university. I loved it. I’m also a Computer Programming Clinic Helper and CS Course Student Helper.

How was your first day at FifthWisdom?
So I remember very well that I started in 2009. My first day was in the previous office we had over in Sheung Wan. I met with Clara first, and I thought she just graduated like me but actually she was coming back from France. The colleagues were really nice, and I remember pretty well Clark, who was a Graphic Designer. He helped me lot and explained me to relax during this first day. He was really funny. Now I’m more experienced and it’s my turn to bring these to new colleagues, I like that. Working at FifthWisdom is great because it gives me freedom and flexibility on top of being involved into a meaningful cause.

What’s your favourite game developed by FifthWisdom? (and why)
A game called Brain It. I like this one because it helps students train the brain. It’s fun and there are statistics for students to continue training and challenge their friends all the time. This way they don’t realise they are training. I also like 3 mini-games: Right brain check (9 patterns), the opposite sign, scissors paper rock.

What’s your favourite video game in general? (and why)
I like playing video games, Monster Hunter on the PSP, because it’s quite challenging and you can play with friends and it’s not like most traditional RPG game. There is no level-up system and you can only upgrade your equipment by cutting monster and sell it to buy more weapons or equipment.

What do you think the Future Of Education is going to be like?
I think students may use iPad or tablets instead of the books and perhaps robots will replace teachers, who knows? Still I don’t hope it’s going to be like that soon, because interactions between students and teachers is the key to learning so with a robot it’s going to be difficult. Social life is key within the Education environment at school.
I believe a lot in VR and AR. Especially the VR headsets which could be in the classroom. Students would more interested for sure.

What’s your favourite tea?
Definitely the black sesame soup which is my favourite traditional Chinese dessert.