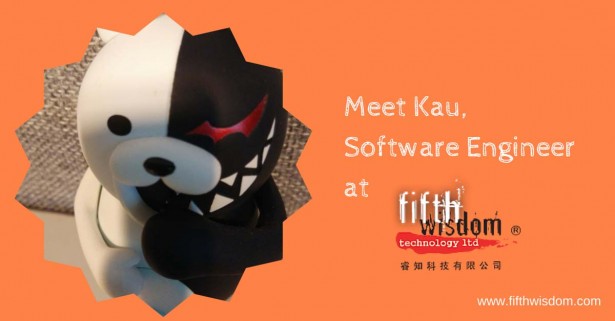 Who are you?
My name is Kau and I’m a software engineer at FifthWisdom. I’ve been working here for four years now. I’ve decided to become a programmer because to me, it is like being a god in the game. You decide about it. About the structure of it, the decisions players will have to face, the path they will follow. It’s a lot of work and responsibility and I love it.
I am interested in playing video games the same way I like making games. The reason is I want to put myself in the shoes of the player and understand what it’s like to play the game. What are the emotions one can have playing the game: happiness, frustration, anger etc.

How was your first day at FifthWisdom?
I remember very well when I entered the office, I just saw 1 staff there. I thought “Is this it? Where is the rest of the team?” I was quite surprised and thought all the people were having the day off. That was funny to experience this.
Everyone at FifthWisdom is very nice and playful. It is easy to build up good work and great relationships with coworkers like that in this environment.

What makes working at FifthWisdom special?
I can make many digital games for students that help them build up more skills such as English, Mathematics and Science. I think it speaks for itself.

What’s your favourite game developed by FifthWisdom?
My favourite one is “Five Thousand Years History of China: The Historical Figures” because the characters in the game are beautiful and there are lots of mini-games within the game that integrate all the spirit of Ancient China with a catchy graphic design. I played it and learned a lot about the Chinese history knowing the character’s backgrounds.

What’s your favourite video game in general?
Sangokushi Taisen. It’s a card game I play at the Amusement Game Centre in Mong Kok. There are sensors installed and they detect the cards on the machine, so it’s interactive and real-time strategy, and I love that part. I can play with other people or online with Japanese players.

What do you think the Future Of Education is going to be like?
I think that the Future of Education is synonym of more electronic devices in the classroom rather than paper. Students and teachers alike are more likely to use AR or VR which means lots of changes in the way you train teachers – they will have to study how to control the machines – and students will be more typing than actually writing. It will have for sure some consequences on the language we’ll use tomorrow.